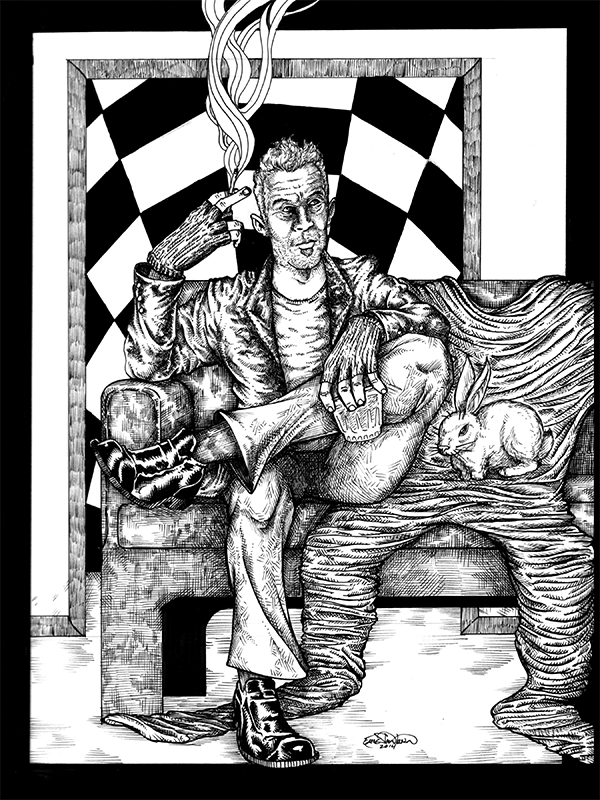 It’s my dad’s 73rd birthday today, so I decided to draw an old man smoking and drinking, since that’s how I’ll best remember him from my childhood. Ah, that’s not true. He hasn’t smoked since the year 2000. It has been a trying year though, what with him getting cancer and getting curative surgery to rid the tumor from his lung. As far as we know, his cancer is gone. I’m assuming he’s getting regular checkups. If the cancer has come back and he hasn’t told us, well, that’s a dick move, Dad. I hope it hasn’t though, and I’m glad that he’s still here to celebrate another birthday and I hope he’s still around for a long time to come. He’ll never read this and I hope he doesn’t. But – just putting out into the æther – I love you Dad.

Anyhoo, this drawing isn’t for my dad (though he saw me work on it a couple times). It is a commission for Chris Pfiefer who apparently collects Tom Waits artwork. He asked me to do this back in December, and shamefully I only just finished it. It was a hoot to draw though. Luckily Waits has a very distinct look that I was able to try to aim for when drawing his face. I’m terrible at likenesses, but think I, at least, am in the parking lot of the ballpark. Chris asked to somehow represent either Waits as a musician or an actor. I could not be less of a fan of Waits’ music (though I do enjoy his rendition of the theme from The Wire during season 2 [?] of that show), but I have enjoyed him in every movie I’ve seen him in. So I added a bunny to represent Seven Psychopaths, his Renfield straightjacket from Dracula, and a checkerboard room for The Imaginarium of Doctor Parnassus. I would have liked to have added the weird hand-brace thing from Dracula, but couldn’t find decent reference for it. Also, I would have added one of the crazy weapons his character builds in Mystery Men, but that would have meant having to remember Mystery Men – which I’d rather not do.