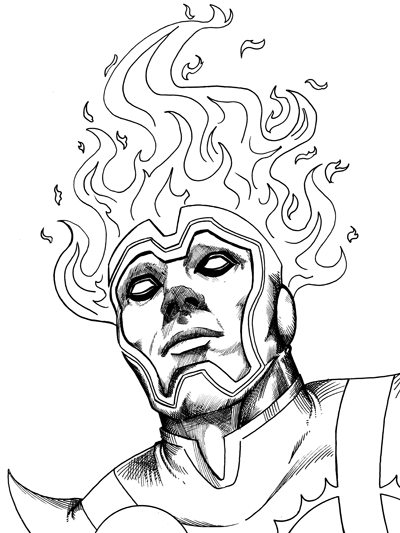 Starting September 20th and running until October 31st, 3/4ths of Ok, PANIC! will have their art on display and for sale at Christopher’s Restaurant in Kettering, Ohio.

Jason Young, Jeff Potter and I have each done five portraits of various superheroes. I will be posting mine here on the blog, but please, if you live in the area, go see all fifteen pieces at Christopher’s. Jeff and Jason have both really outdone themselves, and it’s some of their best work I’ve ever seen.

I can also say that the food is quite delicious at Christopher’s. They serve a wide variety of dishes and are very vegetarian friendly. Even for a meativore like myself, I often have enjoyed the portabella mushroom burger, the veggie chili (though I prefer the normal chili), and my personal favorite, the Hot Cheese Supreme, aka the best grilled cheese I’ve ever had.

So go there, eat awesome food, look at awesome art, spend some of your awesome money on us.

***
Alright, some more comics were read, let’s do this:

Justice League International: Another book I was excited to read, but for the most part was simply mediocre. The biggest negative I have on this was it seems to really rely on the reader having previous knowledge of all the characters involved and other story bits (the Hall of Justice subplot, for instance), but seems to also be “introducing” all these characters for the first time. Booster Gold is treated well character-wise, but holy hell his new costume is terrible. It’s a step above his Extreme Justice armor, but so are turds. Other than that, it’s an okay story with decent art. I want to love this book, and it actually seems to have a sense of humor, which none of the other DC #1s have. It’s not the old JLI, though, which may be the basis of my disappointment. I’ll still check out issue # 2.

Stormwatch: Just… disappointing. I just… I dunno. The art was not good, and really turned me off, but the story didn’t help at all, either. Sigh. Other than the art, I can’t point out exactly what it was that I didn’t like. Probably won’t get issue 2.

Batwoman: Pretty much just a continuation of the previous run in Detective Comics. Plus, Chase and the DEO! But really, it all comes down to three words: J.H. Willaims. I’m never not going to buy this as long as he’s on board.

Batgirl: I’m a pretty big Barbara Gordon fan, and while I tend to agree with the majority that Babs as Oracle was an insanely rich and compelling character, I’m also pretty stoked to see her back as Batgirl. Gail Simone – a writer who lives and breathes Barbara Gordon – writes a strong first issue centered around Barbara’s character and determination, and the art is good. I’m sticking around on this book, for certain.

Frankenstein – Agent of S.H.A.D.E.: Man, what a fun book this was. I loved Grant Morrison’s Seven Soldier’s mini, and this takes all the great parts of that story and makes it crazier, weirder, and added The Creature Commandos, making it the first time I ever gave a damn about them. It’s got a decent sense of humor, and the art is fantastic. I got a real vibe of mid-80s Epic Comics from this book, and that my friends, is awesome. Definitely going to continue with this book.

Animal Man: Definitely a strong book, so far it’s the one that practically slapped me in the face and demanded I come back for more. The mystery is intriguing, the characters are just as likeable and appealing as when I first read Morrison’s Animal Man, and I love the weirdness that’s growing. The art is inconsistent, but at it’s best, it’s fantastic. Looking forward to see where this is going.

Men of War: Holy balls. I’m ready to declare this book as the best from the new DC. It’s so tense and action packed, it’s like a Garth Ennis story combining war and superheroes without all the shock value, lowest common denominator factor things that usually spring from an Ennis book. The art is reminiscent of Darrick Robertson without being a copy, the storytelling is clear and concise. I didn’t bother reading the back-up story, but that main story… wow. I did not expect much from this book, but I truly don’t think that that is affecting my opinion. This truly was an incredibly strong, ballsy comic. I loved it.