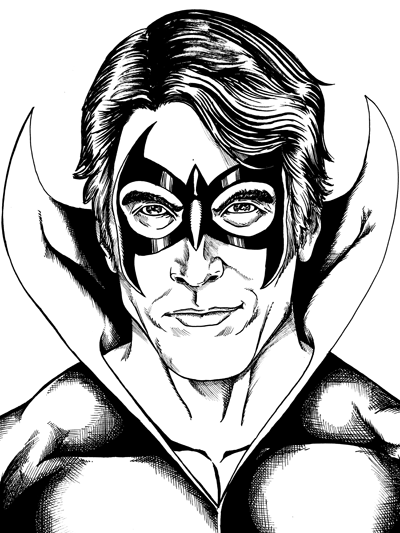 Part 2 of my contribution to the Christopher’s Restaurant art gallery that is on display from September 20th through October 31st. Jason Young and Jeff Potter, my fellow Ok, PANIC! artists, have each done five portraits of various superheroes, and they are all available for sale. If you live in the Dayton, Ohio area, go eat some delicious food and enjoy some great comic-related artwork.

***
I’m really trying to get back into the habit of reading comics again, so I might continue to do this.

Ultimate X-Men: Apparently, mutants were created as part of an experiment by the U.S. government, Wolverine being the first. Then mutantism started spreading like a virus, I guess. Whatever. This follows up on all the hoopla of the Ultimate Fallout story and of Jeph Loeb & Art Adams’ Ultimate X series, which was only worth buying for the art. 5 issues came out in 2 years, which makes me think that this Ultimate reboot, which seems to come pretty quickly after the last Ultimate reboot, is because Ultimate X took so long to come out. Anyway, this was a fine comic, a lot of appearances from former X-Men characters, an intriguing set-up for future stories, and Ultimate Val Cooper. I’ll keep with this for a bit.

Daredevil # 4: I’m not supposed to like this book. I’m not a fan of Mark Waid’s work. I used to be, back in his first runs on Flash and Captain America, but everything else I’ve read from him has been pretty mediocre. I love Daredevil, he’s my favorite Marvel character, but I was dreading Waid on this book, for the aforementioned mediocrity, plus it doesn’t really seem like the type of character Waid usually is drawn to. But it works, it absolutely, bafflingly works. The second issue of this book made me want to tear it up due to a litany of legalese puns, but that only happened that once. Plus Paolo Rivera is a fantastic artist, and Marcos Martin is fucking amazing. I’m actually angry that I like this book so much. Goddammit, Daredevil.

Catwoman: Eh. The art’s fantastic and cheesecakey, but there’s seemingly no story here, and if there was, I missed it. It’s really just a string of scenes, all to lead up to the final 4 pages of Batman and Catwoman fucking – which apparently is freaking people out. Eh. Whatever. My only problem with it is that between this and Damien Wayne existing, it destroys my theory that if Batman ever got laid, he’s stop being Batman. Hell, when I was getting laid regularly, I pretty much stopped doing anything else. But otherwise – eh.