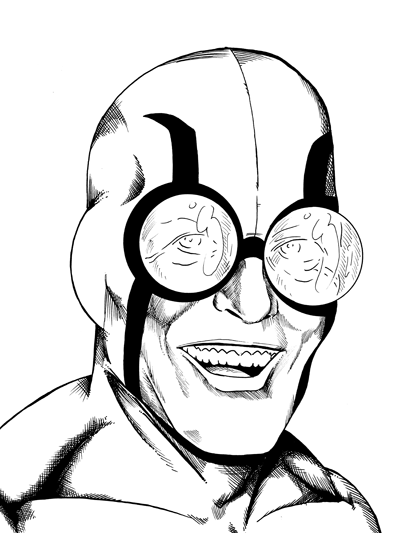 Part 3 of my contribution to the Christopher’s Restaurant art gallery that is on display from September 20th through October 31st. Jason Young and Jeff Potter, my fellow Ok, PANIC! artists, have each done five portraits of various superheroes, and they are all available for sale. If you live in the Dayton, Ohio area, go eat some delicious food and enjoy some great comic-related artwork.

Big Bad Wolf: Terrible horror comedy about a jokey, rapey werewolf played by the bad guy from Kindergarten Cop. The lead actor is the older brother of the girl who played Hit Girl in Kick-Ass. One of those siblings got all the acting talent. The other was in Big Bad Wolf.

I Spit on Your Grave (Original): Pretty much you’re either gonna like this movie or you’re not, depending on your tolerance for late ’70s exploitation flicks with a rape/revenge plot. For what it is, it’s not bad. I loved that there was no music in this movie except for diegetic music. It’s not terribly acted, it’s intense and slow, but it’s not a “good” movie either. I’ve seen worse, in all aspects of the word.

My neighbors: Ok, so I was sitting in my office when I hear yelling, which – sadly – isn’t unusual. I look out my window to see the lady (the one who is actually supposed to be living in the apartment) screaming at the guy (the one who isn’t supposed to be living there), and she’s holding a baseball bat. He’s in his car, and she starts pounding the bat into the door. He opens the door, and she starts hitting him in the arm and chest. I roll my eyes and go into the living room.

I go back into the office, and still hear yelling, so I look out. She is now sitting in the backseat of his car, looking at her phone and yelling at him. He is sitting in the driver’s seat, yelling at her, but he gets out and sets a tallboy wrapped in a brown paper bag on the hood, and then proceeds to take a piss on the driveway. I go back to the living room.

I go back to the office again, and everyone’s gone. Back into the living room.

I sit down, I’m watching a movie and then I hear some heavy bass thumping. I open my door to see the car now parked where I usually park, he is inside and has the stereo turned all the way up listening to some obnoxious hip-hop. I close the door and continue to watch the movie. This lasts for about 45 minutes and the music stops. I hear stomping and slamming upstairs, but it all dies down around 9:30pm or so. The car was still parked in my spot this morning when I left for work.

Sadly, the neighbors seem to know exactly how far the surveillance cameras reach, and always pull this bullshit away from the all-seeing eye.

Thought about calling the cops, but in the end, I thought it was more funny and annoying than anything else, and they can knock the shit out of each other all day for all I care, as long as I get left alone. I’ll be more mad if the car is still in my spot when I get home. I just wish I’d have had my phone on me to take a video of the beating to show my landlord.