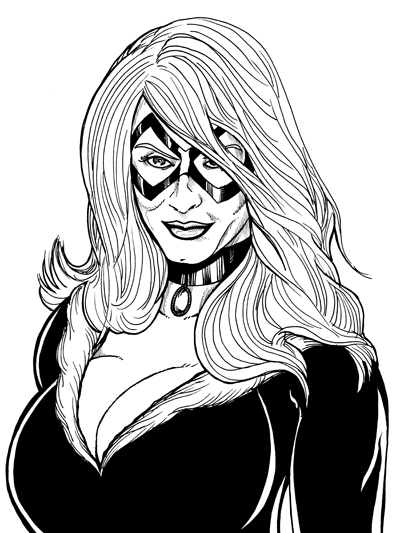 Part 4 of my contribution to the Christopher’s Restaurant art gallery that is on display from September 20th through October 31st. Jason Young and Jeff Potter, my fellow Ok, PANIC! artists, have each done five portraits of various superheroes, and they are all available for sale. If you live in the Dayton, Ohio area, go eat some delicious food and enjoy some great comic-related artwork.

Birds of Prey: I honestly just remembered that I even read this, but I couldn’t tell you what happened in the book, what it was about or if I had any thoughts on it. Which should probably tell you all you need to know.

Nightwing: Eh. I love Nightwing, and I want to support the character, but after two fantastic years of him in the role of Batman, working out perfectly by some fantastic creators, this seems like a step back. The art’s fine, and there’s a mystery element, but this is also like the 17th time I’ve read a story about Nightwing setting up a new chapter of his life right when some old part of his life comes out of nowhere to fuck things up, and oh, hey, the old circus is in town, he should go visit old friends. It’s not bad, but not a standout.

DC Presents – Deadman: I can’t remember much about this book other than I recall being bored while reading it. Then Deadman jumps into someone’s body and threatens to make it commit suicide. Spoiler.

Wonder Woman: I love Brian Azzarello’s decision to give Wonder Woman a seemingly entirely new status quo and not explain a single part of it. It’s something that seems like it’d be a bad way to go about it, but he pulls of brilliantly by not making you care, and this story is about moving the plot along. It’s essentially a story about the Greek Gods fucking with humans and ruining their lives for shits and giggles, just like the old times, and Wonder Woman is there to stop the bullshit. I liked this book quite a bit, and the art by Cliff Chiang is great.

Batman: Not only is this a dark and gritty Batman, but it also manages to have a sense of humor and fun just underneath the surface. Scott Snyder is taking Grant Morrison’s idea of a well-adjusted Bruce Wayne and working the hell out of it. In fact, by simply existing, Snyder’s Batman makes Tony Daniel’s Detective Comics look like a ******** brain damaged coma victim wrote that book (it was a mentally challenged person who got into a horrific head-injury accident, and then slipped into a coma which further expounded the brain damage). Here’s something else Batman does better than Detective: art. I pretty much think of Tony Daniel and Greg Capullo as contemporaries, both coming up together at around the same time, both having a deep-rooted Todd McFarlane influence, even working for the man at various times. I’ve never been a fan of either one of them, but holy crap, Greg Capullo is perfect for a Batman comic. It might be that he has a different inker who is able to pull forward all of his strengths, but I’ve never seen Capullo draw this well. This was an absolute revelation.