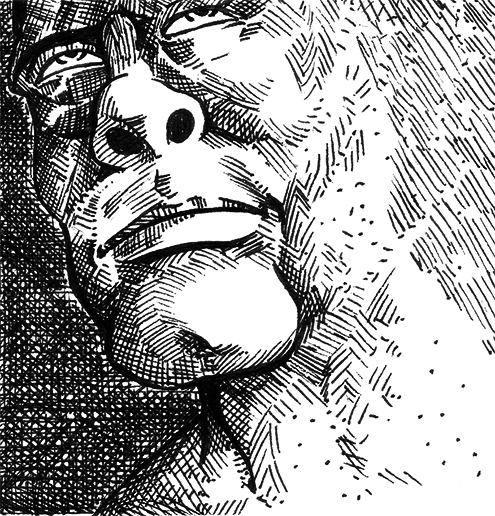 Burnt Offerings. Horror film from the mid 70s, a family moves into a summer rental house and weird stuff happens. It’s got an original premise (honest, but if I say what it is, it gives away “the twist”) but a sluggish pace and it looks terrible.

I also watched two episodes of the brand new Netflix exclusive series Hemlock Grove. What a turd. Bad acting, cheap looking, unoriginal and designed to see how much cliche and “kewl” and weird stuff can be crammed into it without any kind of – well, anything – happening. Also, there’s a werewolf transformation. It’s a lot of CG and cheap and fake looking. 30 some odd years ago, An American Werewolf in London came out and created the best werewolf transformation of all time using only practical effects. Every werewolf movie/show since then has dropped the fucking ball. Fuck you, Hollywood.

I love the original “Evil Dead” movies. “Evil Dead 2” is one of my all time favorite movies. It made me realize horror and comedy – when done well – are great fuck buddies. “Army of Darkness” amps that up. I also still love the original “Evil Dead”. It’s still got a sense of fun, despite being straight horror. It’s horrific, it’s tightly paced and for the manner in which it was made (cheaply, quickly, dirty), it’s innovative and boundary-pushing.

The new remake isn’t. It’s flashy, it’s slick, it’s got a huge budget and doesn’t have a lot of original ideas in its pretty little head. And that is disappointing. The best remakes are the ones where something new is created from the basic premise of the original. Cronenberg’s “The Fly”. The new “Evil Dead” is more interested in paying fan service with clever homages to the original series that spawned it, little winks and nods as it plays out the original film’s plot, but modernised. For everything new it brings to the table, it also brings with it 10 old things, refurbished. It gets distracting and pulls you out of the movie and makes you realize you’re watching a remake of a different movie. I guess if you’ve never seen the original, then you might be fine.

That said, it’s still a really good movie. The scares and tension are genuine, the horror cliches are slightly turned just enough to make them interesting. The acting is solid and the characters are (mostly – there are two who I kept forgetting about until they wandered into a scene) developed enough to make you care about what happens to them. There’s a couple scenes where I flinched and tensed up due to the gore and violence – which is rare for me. Oh, and the effects – practical. Like, 90% practical. And it all looks amazing.

So, yeah. I dunno that it’s a must-see, especially in theatres, but it’s definitely worth a rental. It’s solid.

G.I. Joe: Retaliation. I liked the first one. I thought it dumb fun. I liked the show as a kid, I had the toys. Don’t care that it wasn’t “faithful”. I liked it. That pretty much sums up how I feel about this one. I liked it. Dumb fun, splodey. Although, it is kinda faithful to the comics as far as playing out the Snake Eyes/Storm Shadow story. It was a good waste of two hours. In fact, I liked “Retaliation” better. Better action, better story, better cast, better characters.