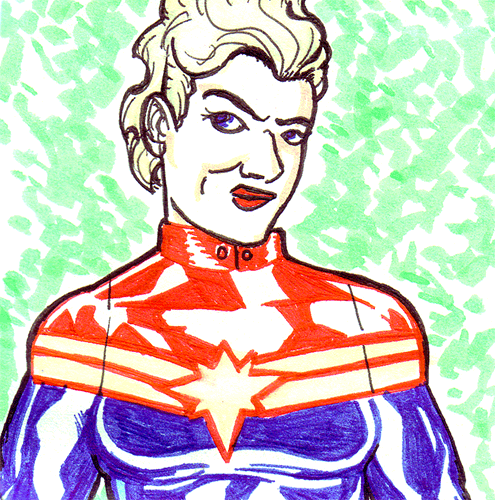 I’m really liking this character a lot. I bought the first two trades of her new series and it’s delightful. Because of this, I also bought Kelly Sue DeConnick’s issues of AVENGERS ASSEMBLE. It’s definitely one of the best superhero team comics I’ve read in the last decade. Short arcs, it’s fun, funny and still able to be action packed and have an emotionally impactful moment or two. It’s definitely the best Anything Avengers thing I’ve read that’s not the original run of YOUNG AVENGERS.

Anyhoo. It was also nice to draw a Marvel character for once. I do have a confession to make. I’ve been drawing more than just “Legion of Superheroes” characters this past month. I have a crapton of post-it sketches I’ve doodle while at work. Especially from the past few weeks when our servers blew up and there were a few days where little-to-no work got done, and now that the servers are back, my work machine runs a lot slower than usual and so I have time to doodle things here and there. What I’m basically saying is brace yourself for a lot post-it doodles that have been accumulated over the last month.

I really love doing the post-it sketches. I usually never know what is going to be drawn until I draw them. Sure, I throw a ton of them away, but the ones that make it usually have no “start” in my head. I’ve thought a lot about making a compilation of post-it doodles, but the main problem is that I can really only do them at work – when I shouldn’t be doing them. I’ve tried drawing on post-its here at home, but it’s not the same. There’s a certain mindlessness to them – a noodling, go anywhere kind of thing that I can’t replicate when I don’t have anything else I should be doing. It’s hard to be mindless when you’re being mindfull of how mindless you should be. Which is a shame, because while I worked hard on the Legion month, I like how most of the post-its turned out a lot better. I wish that whatever it is I can seem to tap into on those I could tap into it when I’m working on something with purpose.

Because I have a lot of these post-its loaded up, I had a few days where I could just breathe and not worry about not having anything for the site. I used that time wisely to play a video game for the first time in six months, and to watch a movie that I knew that I would want to give my full attention to. I watched Upstream Color, the new film from Shane Carruth – the writer/director of Primer. Primer came out in 2004-2005. My friend Bruce let me borrow the DVD and I watched it like 5 times or so in that week. I absolutely loved it. I watched it about three years ago for my podcast and while I certainly didn’t love it as much as I initially did, I still feel strongly that it’s a great movie. Sadly it has taken 6-7 years for Carruth to make another film, one that I was anticipating based solely on my love for Primer. Upstream Color came out a few weeks ago on DVD and On Demand. I was able to snag the disc from Netflix pretty much the day after it was released and I’ve been sitting on it, waiting for the time where I could just watch it without working on something or doing something else.

It’s not Primer. Whatever Carruth has been doing since then and now, he’s certainly become a more confident, competent filmmaker. UC is beautiful and wonderfully filmed. It’s very slow and deliberate movie with not a lot of dialogue, but an impressive amount of visually wonderful scenes and segments. The story is a bizzare one, not easily explained. It unfolds slowly and yet never once did I not care about it. I was engrossed from beginning to end. I don’t want to explain it here, because I think it needs to be seen and experienced by the viewer. That said, it’s also not for everyone. I imagine a lot people will see Upstream Color and absolutely hate it. I can guarantee I might be a person who would have hated this on the wrong day. Much like his first film, it is a very low key, lo-fi Sci-Fi film and a slow paced character drama/character study. It’s not perfect by any means, but it’s smart and I don’t feel like it’s ever trying to show off how smart it is. There are also gaps in logic and storytelling – Carruth’s character seemingly gets cut out of the third act – but it’s ambitious and original and it’s art. Oddly, the tone of this is the type that I think Rob Zombie was trying to strike when he made Lords of Salem. Carruth pulls it off though (having a lead actress who can act helps considerably). I can wholeheartedly recommend Primer to everyone, I think everyone should see it, but I cannot do that for Upstream Color. But, if you loved Primer and were impressed by Carruth, then definitely check out UC.