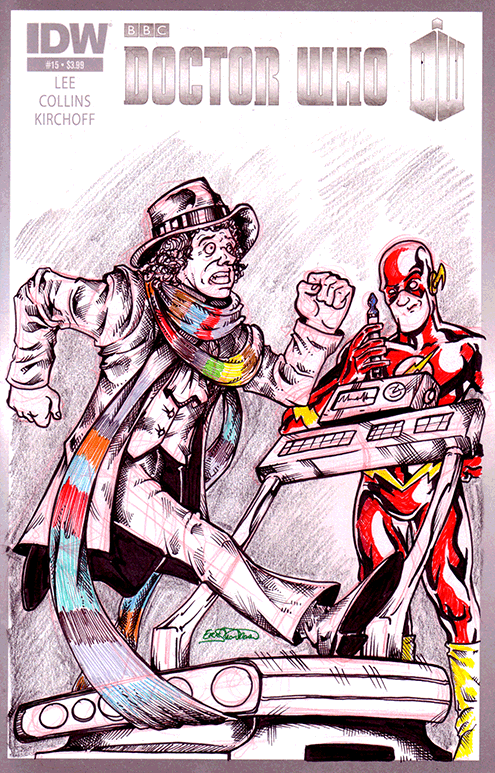 It’s Christmas Eve, and a tradition for geeks is the Doctor Who Christmas Special, which airs tomorrow. So, I got The Doctor on my mind, which was super fortunate when muh pal Joseph G. Runenwald asked me to do a sketch on this blank Doctor Who sketch variant cover. He mostly did it because he knows that if I could be in love with paper, it’s the paper that these sketch variants are printed on. Seriously, it’s the best paper in the history of paper.

So anyhoo, Joe wanted The Doctor running on The Cosmic Treadmill – The Flash’s method of time and space conveyance. I knew I had to add The Flash somewhere, because to a general audience, no one would get what was happening, other than The Doctor running on a treadmill. I asked Joe which Doctor he wanted and like a Joe will tend to do, he gave me the option of basically 8 of the 12 exisiting Doctors – which is no good answer at all. I was discussing the sketch with another friend and she said it would be funny if Four was running and got the crazy scarf caught in the wheels. I hadn’t drawn Four yet, Joe had listed Four in his options, so it all worked out!