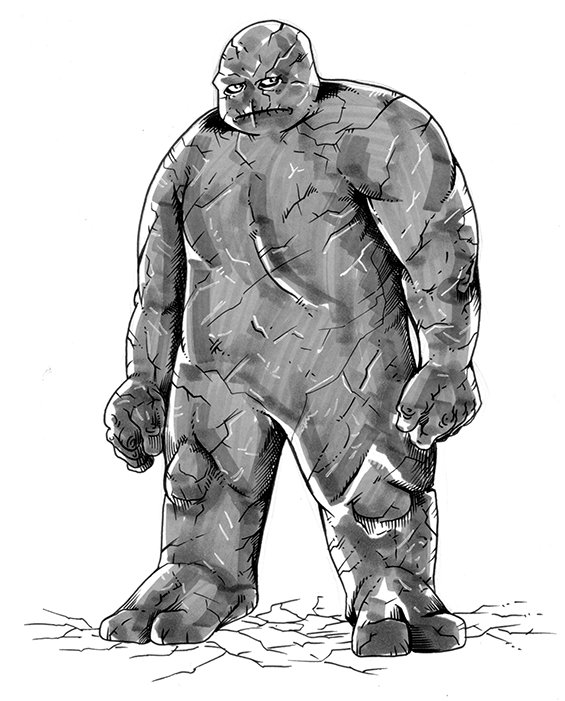 Jason, of Jason Young Fortnight fame, forced me to read a Concrete comic a few years ago, and I loved it. I then went out and bought a couple of the trades. Haven’t read ’em! I’m awful. I loved drawing this, though. This is also the second time Jason has requested Concrete from me. I’m not sure what he expects me to do that I’m apparently not getting right.

***
Speaking of mild-mannered, smart men trapped in inhuman bodies, Bambi and I watched The Incredible Hulk last night, as part of my “let’s catch up to The Avengers 2” plan. I didn’t like it when I first watched it, and now seeing again in the light of 10 other films, it truly is the worst Marvel Cinematic Universe movie. Sure, that could be me saying “It’s good, just not as good as the rest!” But I’m not. It’s also just a terrible movie in general. The whole thing is poorly cast, the plot is paper thin, and – what should be the showcase for this type of movie – the special effects are awful. The Hulk looks like a cartoon of a rotten taffy puppet. He’s also inconsistent in size and shape everytime he appears. The character is also more of a sad-sack than he is raging monster. William Hurt gives a more monsterous performance, though blustery and over-the-top. Ed Norton is… okay. He’s a good actor and he gives Banner a decent charm, but I’ve also never been as in love with Norton as most people are. Liv Tyler is tissue paper. Tim Roth is… sweaty. Tim Blake Nelson does a nice job with a thankless role as the future (and never will happen) Leader. And then there’s poor Ty Burrell. He does well in his two scenes as the sadly unnamed boyfriend to Betty Ross. Well, I know his name. It’s Doctor Leonard Samson, and the very least we can do is honor him by remembering that. His name is Leonard Samson. His name is Leonard Samson. HIS NAME IS LEONARD SAMSON!