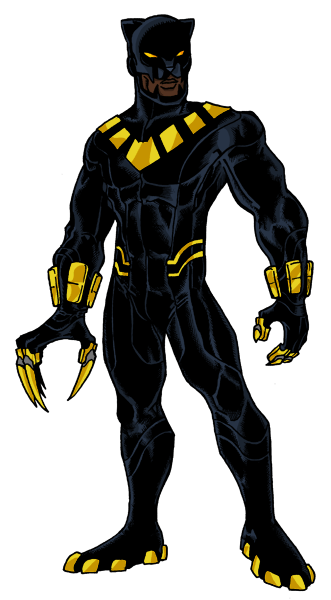 I was hesitant to do a redesign on this character. I think Panther’s costume is so slick and simple that there doesn’t need to be any drastic redesign to it. So I just sorta “New 52’d” this one and just added some lines. I made some other tweaks too. The mask is the big difference. It still feels unneccessary.

B.P. is, however, one character I’d like to write an “ultimate” version of. I’ve always thought it was ridiculous that Wakanda is supposed to be this hidden country that is also the most technologically advanced place in the world, but the citizens run around in loincloths, wielding spears and living in grass huts. Wakanda should be a high-tech utopia, like living inside a computer. It should be Tony Stark’s wet dream.

It’s a groovy time for a movie time:
Dark House Terrible movie I gave up watching far too along into it than I should admit.

Torture Garden An anthology Tales from the Crypt-type movie featuring Burgess Meredith in the wrap-around as Dr. Diablo, a carnival barker type character who shows different characters their grisly fates. Jack Palance and Peter Cushing are also in one of the stories. It was enjoyable if forgettable

Room 237 My friends Jason and Kathleen warned me to not watch this movie. They watched about 20 minutes and it pissed them off. However, they thought they were watching a documentary about “The Shining” instead of what it really is: a documentary about crazy, crazy, bat-shit insane motherfuckers. I dug it a lot.