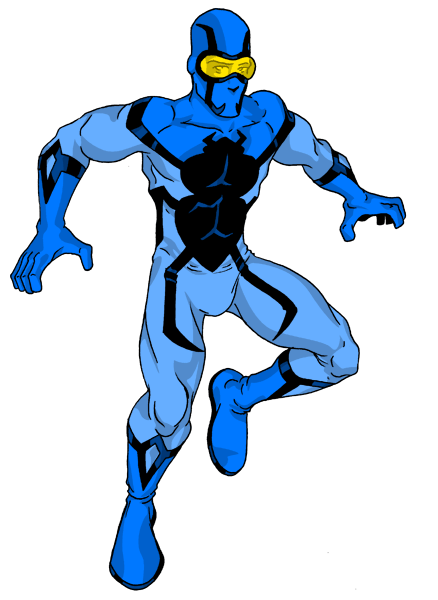 The Ted Kord Blue Beetle is one of my all-time favorite comic book characters. I like him for a variety of different reasons. He’s basically light-hearted Batman. He’s got all the skills, the gadgets and the money without all the brooding, mopey tragic bullshit (FYI, A well-adjusted Batman is my favorite Batman. Give me Brave & The Bold ‘toon Batman over Christian Nolan’s Batman any day). Plus he’s a genius (Batman’s smart, but Ted’s smarter). And he’s funny. Because he puts his wit out on display, everyone underestimates him and treats him like a joke. I like to think that’s a part of his great plan, even though he’s clearly been shown to be bothered when folks put him down. And to top it all off, he’s got a snazzy-ass costume. I challenged myself to do a Beetle redesign. It was tough to pull off a look that was reminiscent of his costume and something newish. I think I did okay. It really helped a lot when I discovered that beetles only have 6 legs, not 8, which I mistakenly believed. I’m a dumb guy.

And if you think I’m not furious that DC still hasn’t brought him back, you would be mistaken.

Also, I just learned that there briefly was a woman running around using Ted’s stuff calling herself “Red Beetle”. She was red. I guess this was in the Justice Society book just before Flashpoint/New 52. Apparently – according to the website I discovered this on – one of her powers is “Attractive Female”. Really? (Edit: To be fair, they list Ted’s powers as being an Attractive Male, so I guess that’s a thing).

I watched Repo Man. I didn’t enjoy it, and I think it’s a matter of not living up to the hype.

I also watched V/H/S 2. I believe I wrote about the first one somewhere here. I had liked it, but it had its problems. Part 2 improves on it in every way. It’s got a two clunker stories, but even those are pretty good. The wrap-around is also far more intriguing. But the real gem is the story called “Safe Haven”. Co-written and co-directed by Gareth Evans of The Raid. It’s a just slow-burning piece of tension that keeps mounting and finally erupts into a bedlam of batshit mayhem. The entire movie is worth watching for that segment alone.