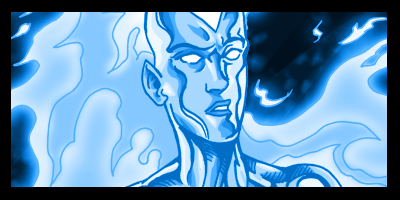 So, I drew this, like, almost a year ago, back in January. It was a weird time. I don’t know how much – if at all – I talked about what was happening in my life at that time. Basically, I was in the middle of a bit of an emotional crash. I found it necessary to completely cut an incredibly toxic person out of my life entirely. Her very presence in my life was worsening my depression and overall quality of life. I’m not saying getting rid of her friendship drastically improved things for me – in fact, I got worse immediately after – right around the time I drew this piece, trying to do anything to get over the mental agony I was in. I was in a terrible place, but I knew it was the right thing to do for my own mental health and quality of life. Eventually I learned what a thunderous cunt this woman was – a despicable, lying, selfish, cancerous, sub-human piece of shit – and rejoiced that she was gone from me forever.

As I started to mentally heal, and began to go to therapy – which, sadly I had to discontinue due to financial woes (despite recieving aid), I felt free enough to do something I had denied myself for a very long time. I began to date. In what seems like a whirlwind, I met a woman named Bambi. Over the last 8 or months or so, I’ve fallen in love. I still have my depression and my anger and issues I desperately need to deal with, but Bambi makes me about as happy as I can get – which is not very, but that’s on me, not her.

Bambi is a) despite her name, not in the sex industry b) one of the smartest people I’ve ever met c) an incredibly talented artist. For a bit, I had even inspired her to do a sketch-a-day blog. While I have spent the last 8 years or so drawing with my friend Jason – and still enjoy and look forward to doing that every week – there is nothing better than being with your significant other and making art, inspiring and motivating each other to create.

Which brings me to this, oddly.

I need a break.

With day 669 (my brotha!), Sketch-a-Day 2.0 is ending as I take a short hiatus. I’ve got some projects I need to get a jump on, and I have found that sketch-a-day was so much easier when I was alone and miserable. Not that I would trade a moment with Bambi for anything, but it got a little stressful trying to balance boyfriend duties, work (two jobs), being slightly more social, and bigger projects with the daily sketch. For the last couple months, I’ve just been coasting through these things and ignored some of those aforementioned bigger projects.

So, as Christmas season is in full swing, Bambi and I will figure out how to work around her new work schedule living opposite hours from each other, and I will be working on other stuff that I can’t exactly post on the blog. I’ll still post a couple things here and there, but the daily sketch is ending. For now. It will be back. I just need a few months. For symmetry’s sake, Sketch-a-Day 3.0 will start back up on February 1st, 2015. So, please, stick around. And maybe by then, I’ll have something cool to show and be a little refreshed.

Thanks to everyone who’s stuck around and enjoyed my dumb bullshit. I’ll see you in a few.