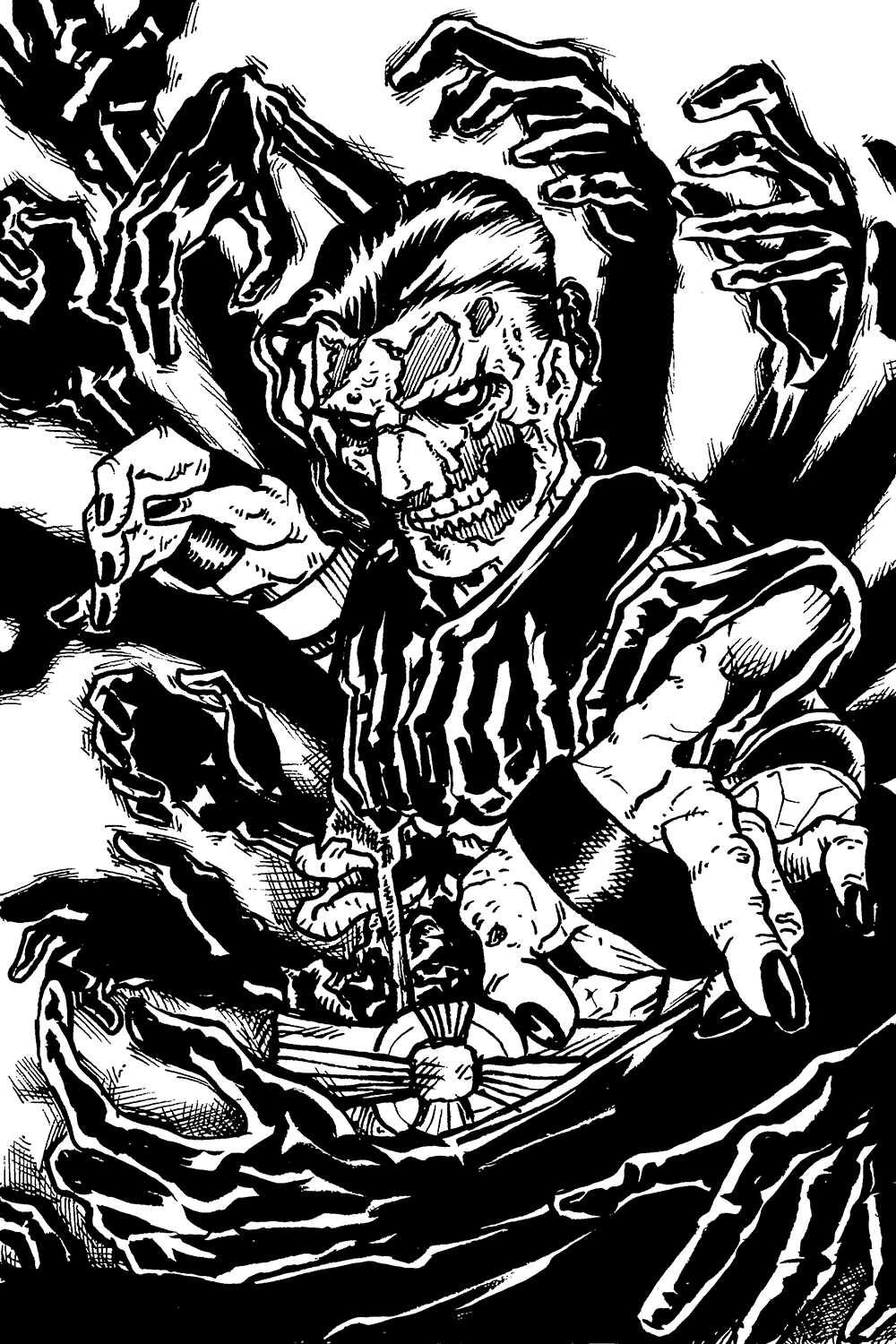 Alright. It’s my birthday. 14 years now I’ve been annually posting sadness. Well, not so much this year. I mean, listen, the world is fucking crumbling around us, and I’m still fucked up and broken, but, y’know, things could be worse for me. In just a few weeks will be the one-year anniversary of meeting a woman who has changed and influenced my life for the better. I have fallen hard. I’m scared of that, because that has generally only led to incredible heartache and then, we get to 14 years of consistent birthday sad-man suicide notes. But, I am attempting hopefulness. Despite an odd and non-traditional situation, I truly think this will be the lasting one.

Meanwhile everyone around me is screaming, on fire, and flailing like windmills. But there’s only like 5 or 6 people in the world I give a damn about, and all I want is for those 5 or 6 people to be okay.

Back like 12 years ago or so, when I got into doing Cover Recreations semi-regularly, I stumbled across this issue of Justice League of America, Issue 95. 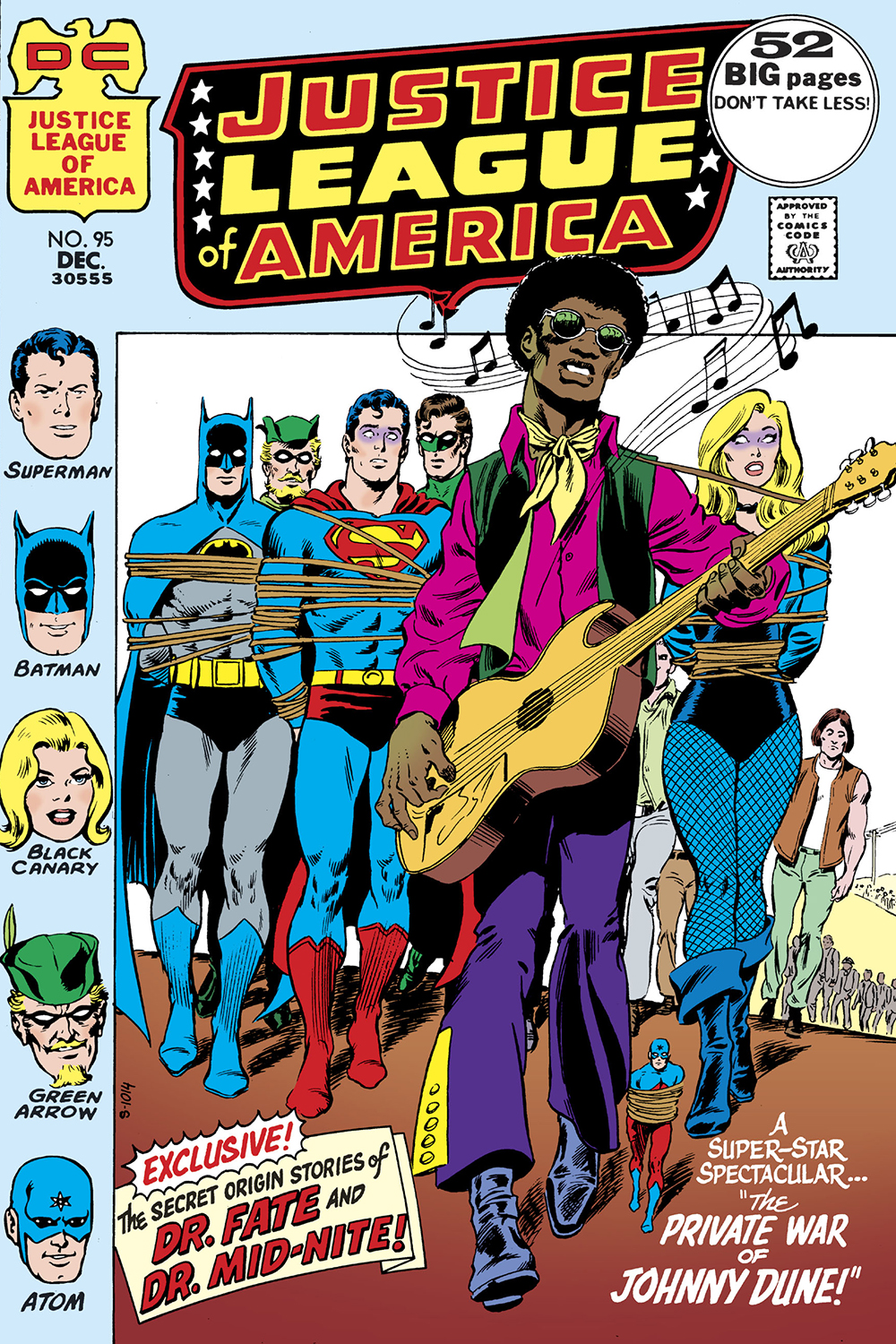 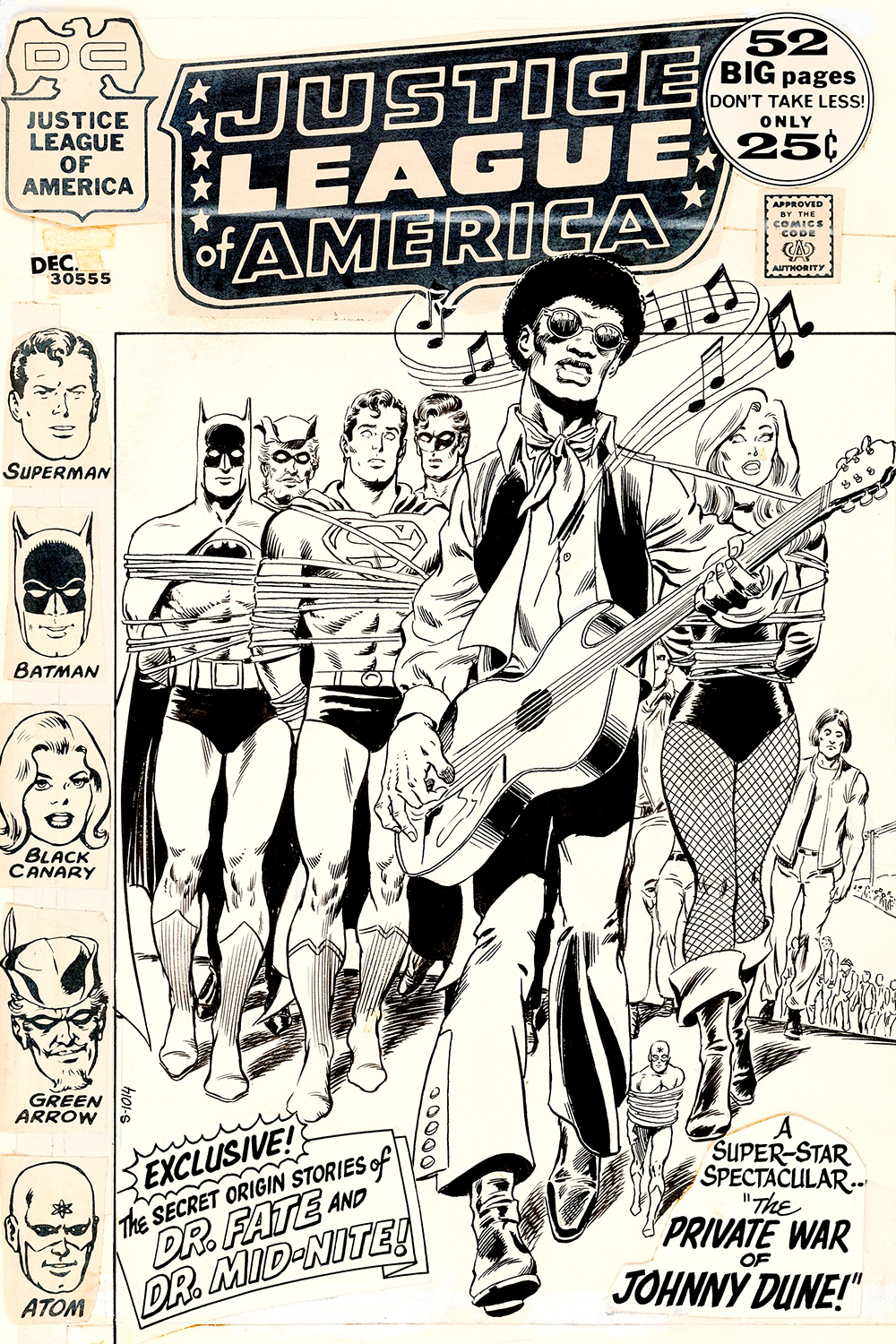 Featuring a cover by the late Hollow-Earth conspiracy theorist Neal Adams, I latched onto the black Pied Piper with a guitar imagery and thought “man, it would be great to re-do this with Prince in place of Johnny Dune”. I even went so far as to set-up the design elements in Adobe Illustrator, do a couple thumbnails and find references for Prince. Then… nothing.

But, it always stayed in the back of my head as a “one day” project.

I’m not entirely sure when or why exactly I just decided “go for it”, but I’m suspecting that the aforementioned ladylove bringing up the song Pussy Control repeatedly sort of snagged onto me. I thought lyrics from that song used as the cover blurbs in juxtaposition with the Justice League dancing and vibing to it were too funny to pass up. The layout and idea I had 12 years ago was essentially the same as I pulled off now, but maybe some better skill? I dunno. For most of the League, I referenced photos of Solid Gold dancers from the 70s and early 80s. All but Batman. I knew I wanted him to be doing the Batusi, and I knew I wanted the Michael Keaton ’89 Batman. Because, as we all know, Batdance is the greatest song ever written and performed, and the Batman ’89 soundtrack is Prince’s best album, and the best soundtrack of all-time.

I decided on the Morrison JLA logo and DC bullet, because, well, I like them. Deal with it. 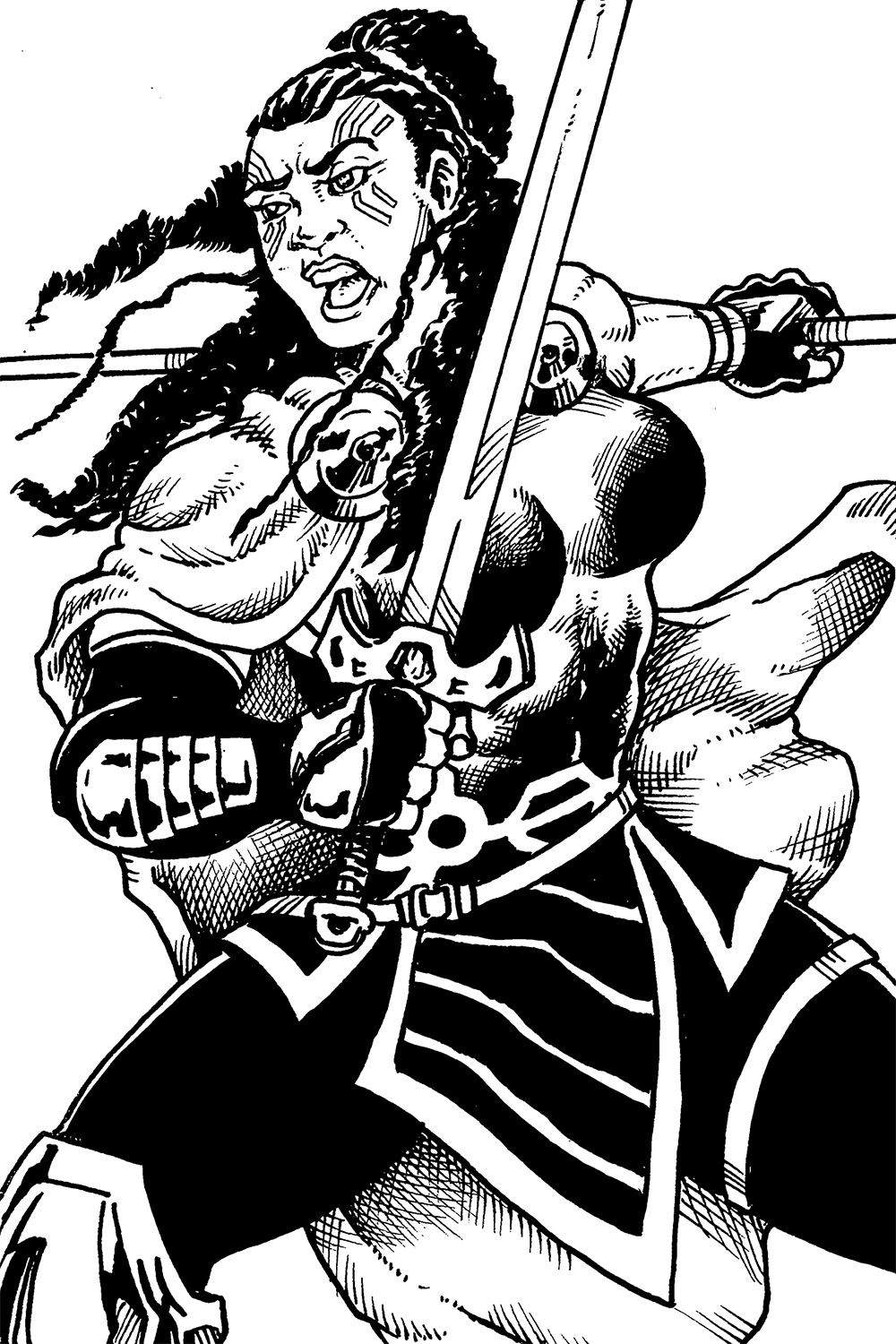 Patron had asked for Valkyrie, and while she told me “whichever version I like”, I knew she’d rather have the Tessa Thompson version from the movies. As is my refrain in life, I am terrible at likenesses. I’m even more terrible at drawing the movie versions of comic characters and their movie costumes. Gimme old-school superheroes any day. Anyhoozlebees, I went with the comic version of the movie version of Valkyrie that was introduced into the Exiles comic after Thor: Ragnarok had come out. 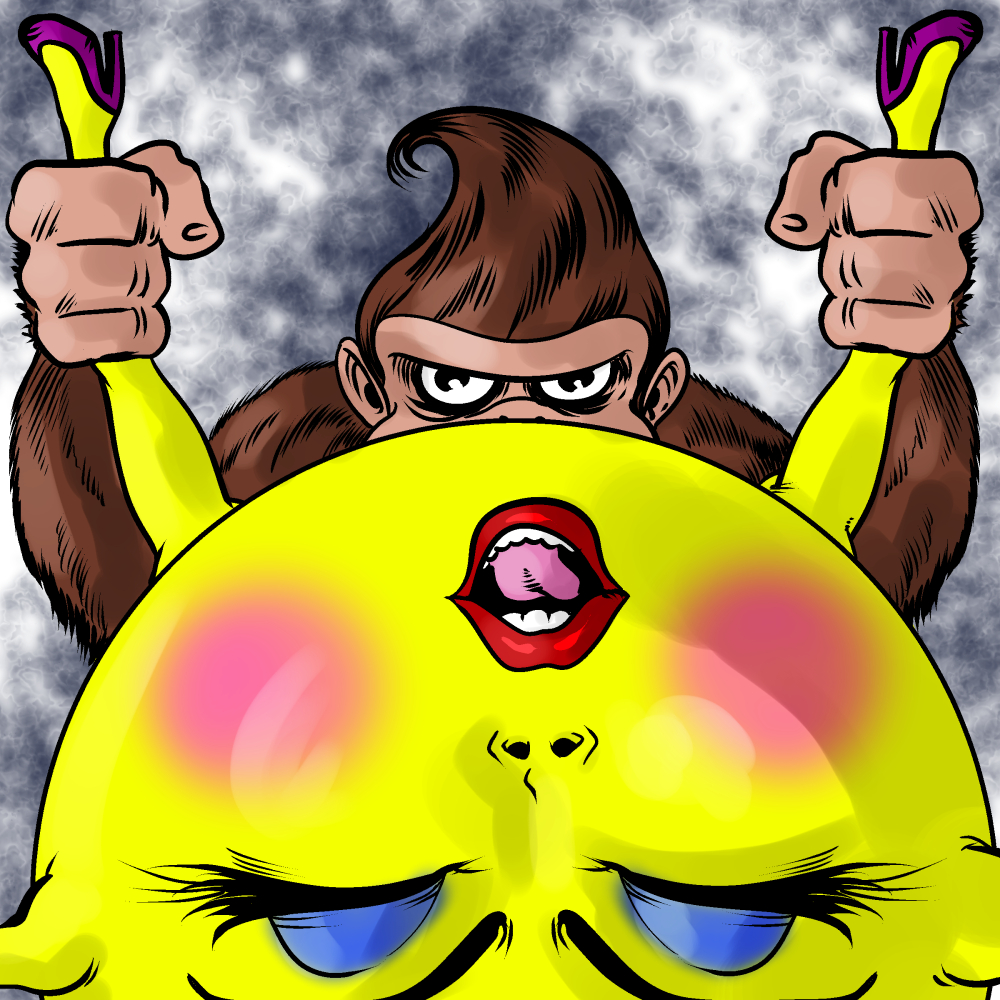 My lovely, queer, polyamorous girlfriend requested this abomination. And I clearly had nothing better to do. 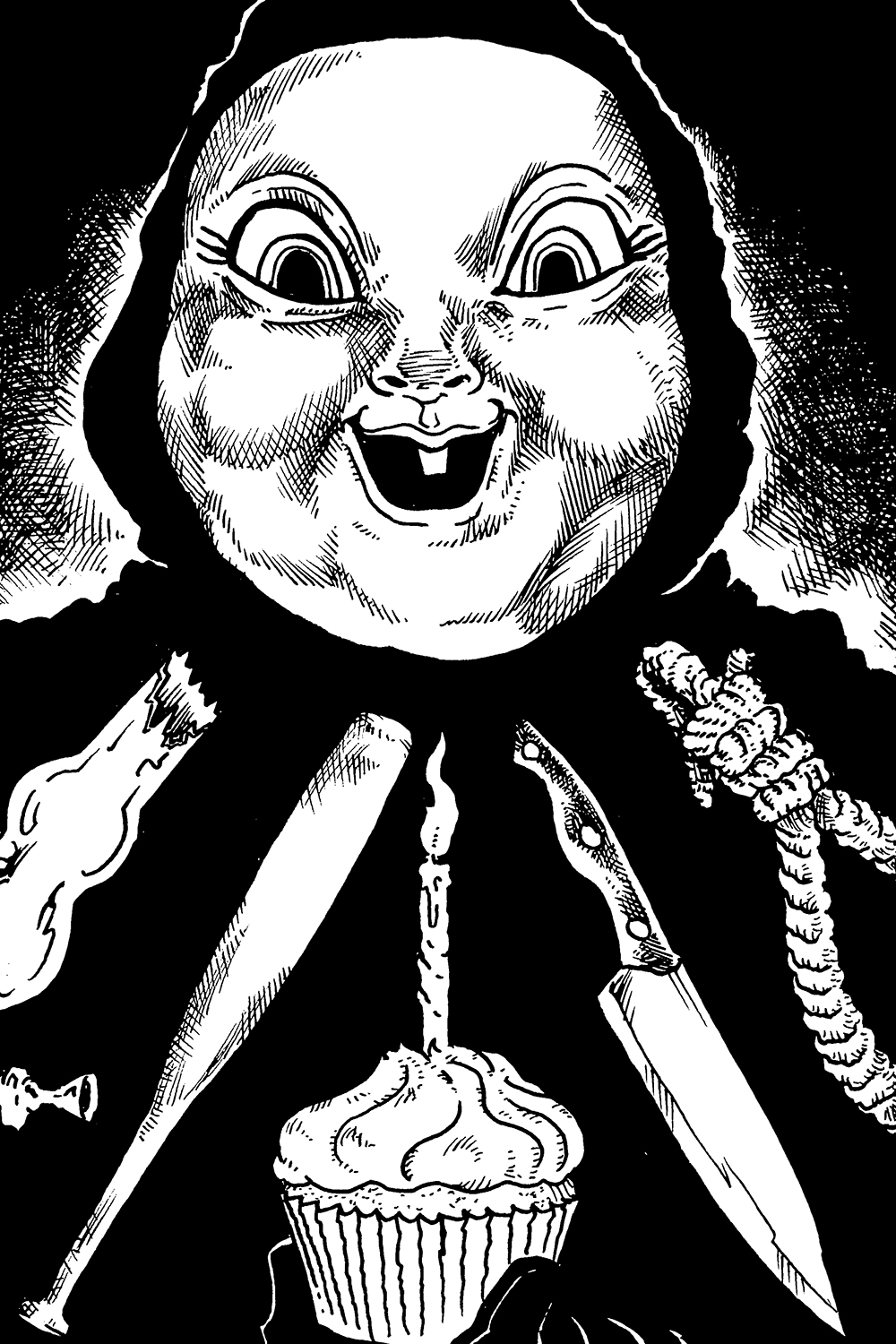 When I first saw the trailer for Happy Death Day, I thought it looked like the dumbest fucking thing ever conceived. A PG-13 horror version of Groundhog Day? Whoopdey-shit. We’re really scraping the bottom of the barrel. When the sequel came out, I thought “really?!”

So, for some reason, fall/early winter of 2019, I decided to give HDD a try. And good lord did I love it. It was funny, it was clever, and – shockingly – it was heartwarming and emotional.

Then I got REALLY pissed when I saw the writing credit for Scott Lobdell. Fuck. Scott Lobdell is one of the absolute worst comic writers in comic book history, and also a fucking creep general piece of shit human. I felt betrayed. I did feel a little better when I learned the script had been fairly overhauled by director Christopher Landon, who also wrote the sequel.

So, like two days later, I rented HDD 2U, and also loved that. It’s definitely not better than HDD, but it is equally as good in a totally different way, while still retaining the charm of the first. If anything, it edges out the original for asking “why is a college mascot a creepy baby?”.

A third is in the works. I also enjoyed Landon’s Freaky quite a bit. Scott Lobdell can still go fuck himself.

Anyhoo, the Patron asked for the Baby Mask Killer and I spent the entire time drawing this while watching both movies and they’re still great. I loved drawing this. 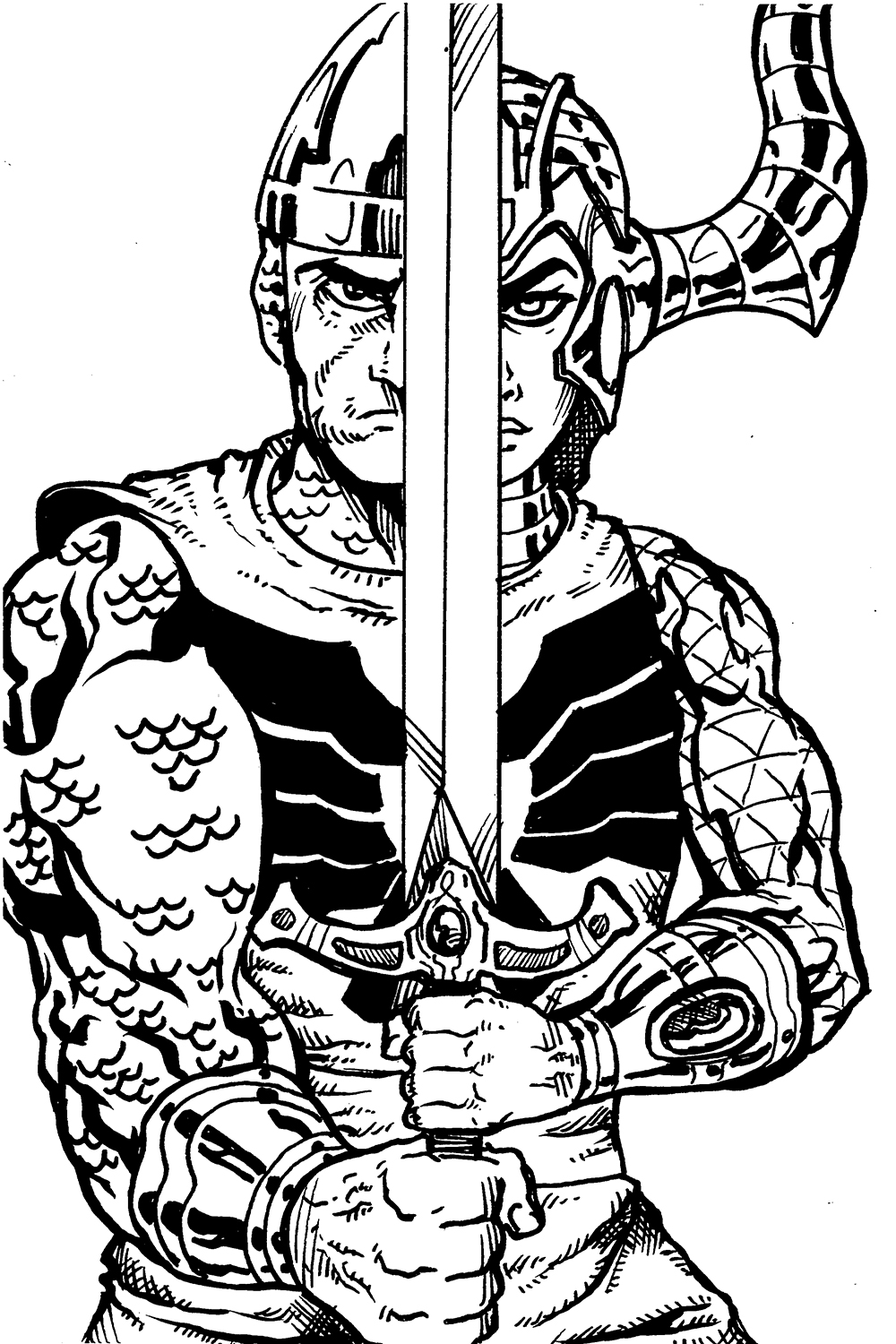 Patron had asked for Shining Knight, but I didn’t know if he meant the original version or the Morrison/Demon Knights version. So I did both. I hope they like it. 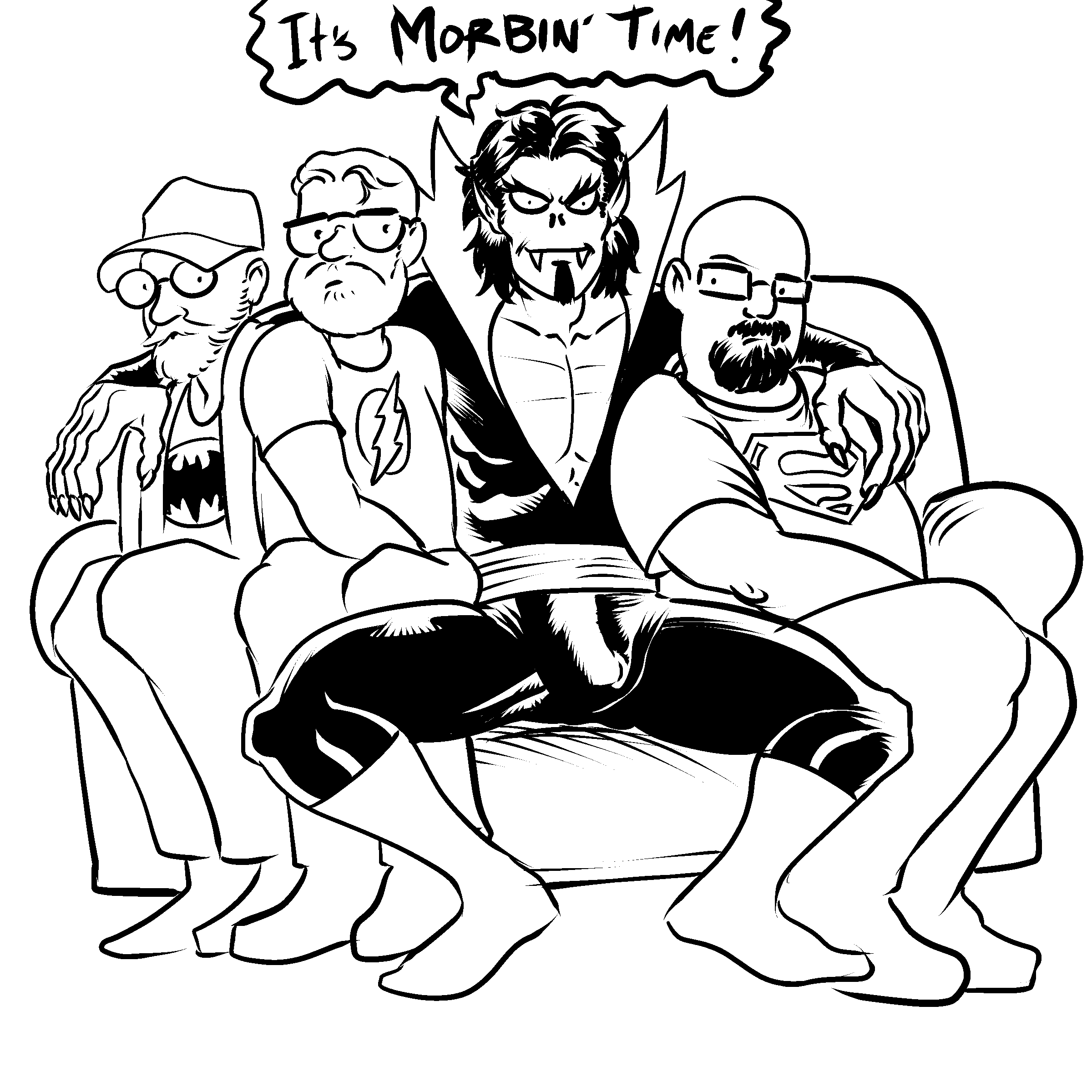 Joe Grunenwald has been one of my closest friends for a very long time. It’s a relationship that started out oddly. He was just a kid that worked part-time at my comic shop. But I’ve grown to love him like a brother. He’s been here for me in some of the hardest times of my life and gotten me through.

Now I need to return that kindness.

Joe’s wife, Jennie passed away last week after a long battle with cancer. I regret that I did not ever extend myself enough to be better friends with her, but I knew how much she loved Joe, and he, her. She was an amazing person, and now Joe is going through a pain I cannot ever imagine going through.

I’m an idiot and I’m not great at deep emotional communication. I’m best at service by trying to make people laugh, and all I can do for Joe is offer my friendship and love and hope he is distracted by my idiocy and hopefully make him laugh occasionally.

So, when Joe asked if I wanted to watch Morbius with him – a movie I had literally just watched a few nights before; a movie that is so bad, it’s not even laughably bad – I said “Yes” immediately. Joe invited our friend Jason to join us. We ate incredible Mexican take-out and sat down to watch professional method lump of coal Jared Leto’s masterpiece.

While we watched, I doodled this.

Joe, I love you, sir. I am so sorry for everything you and Jennie went through, but know that you are loved by so many people and that you will get through this, because all those people will help you get there. And you can get sad and you can get angry and you can feel numb, and it’s all okay. Because it fucking sucks. But me, your friends, your family – everyone who understands – we’re here for you. And we’ll try to help make it suck just a little less. 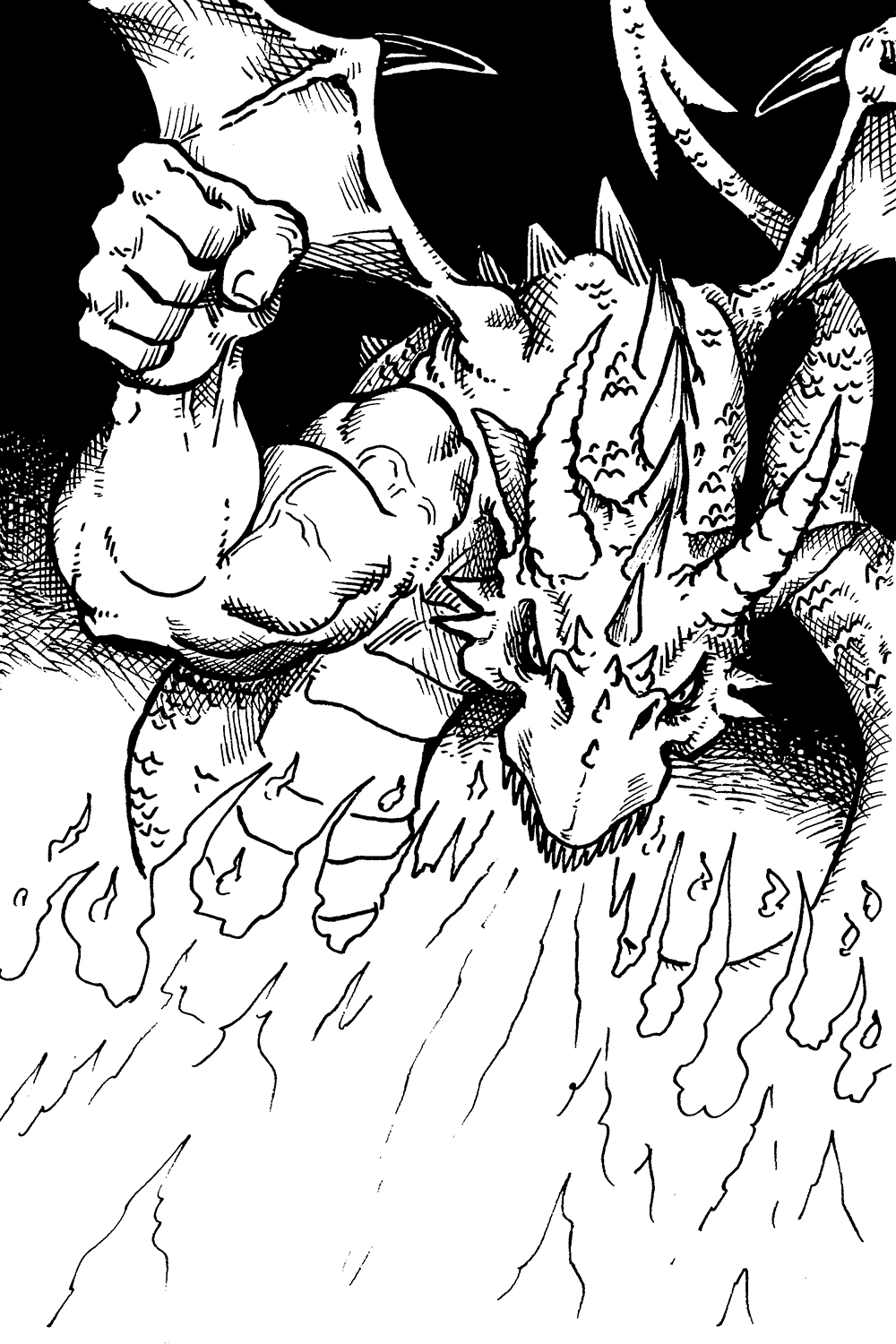 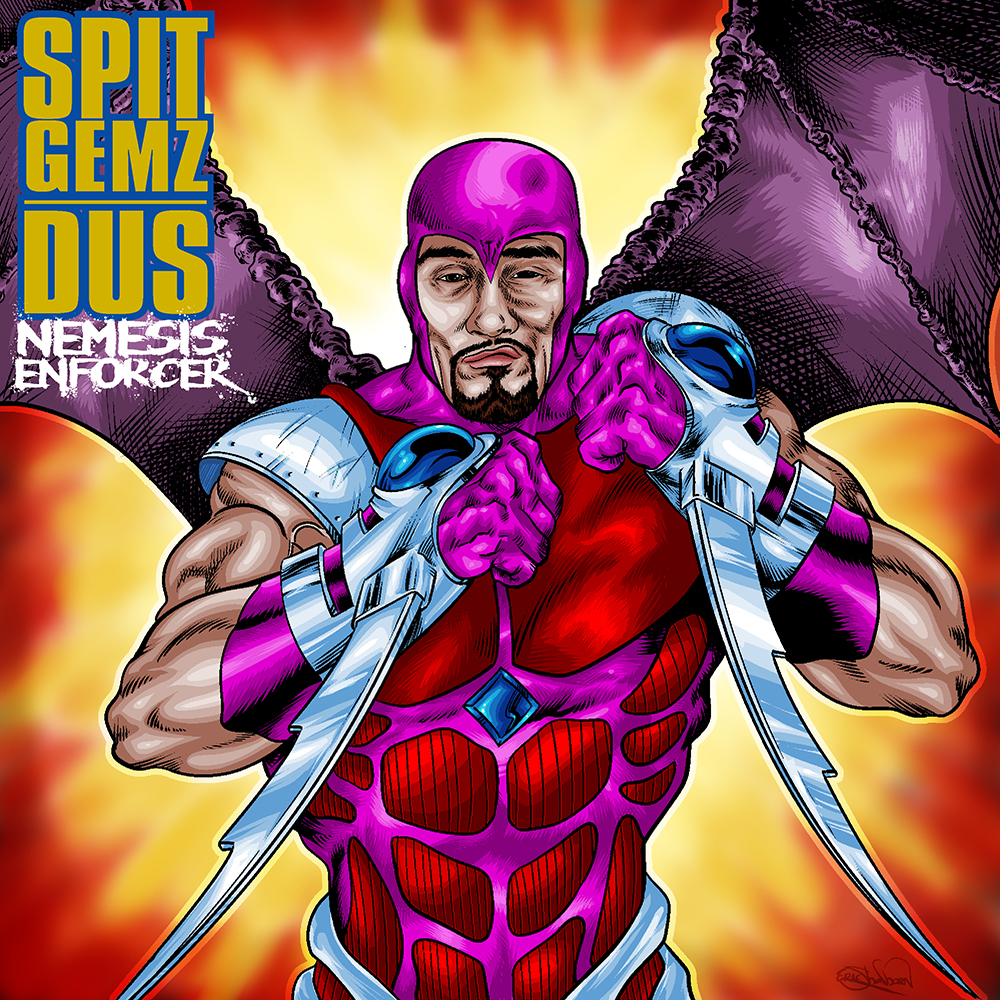 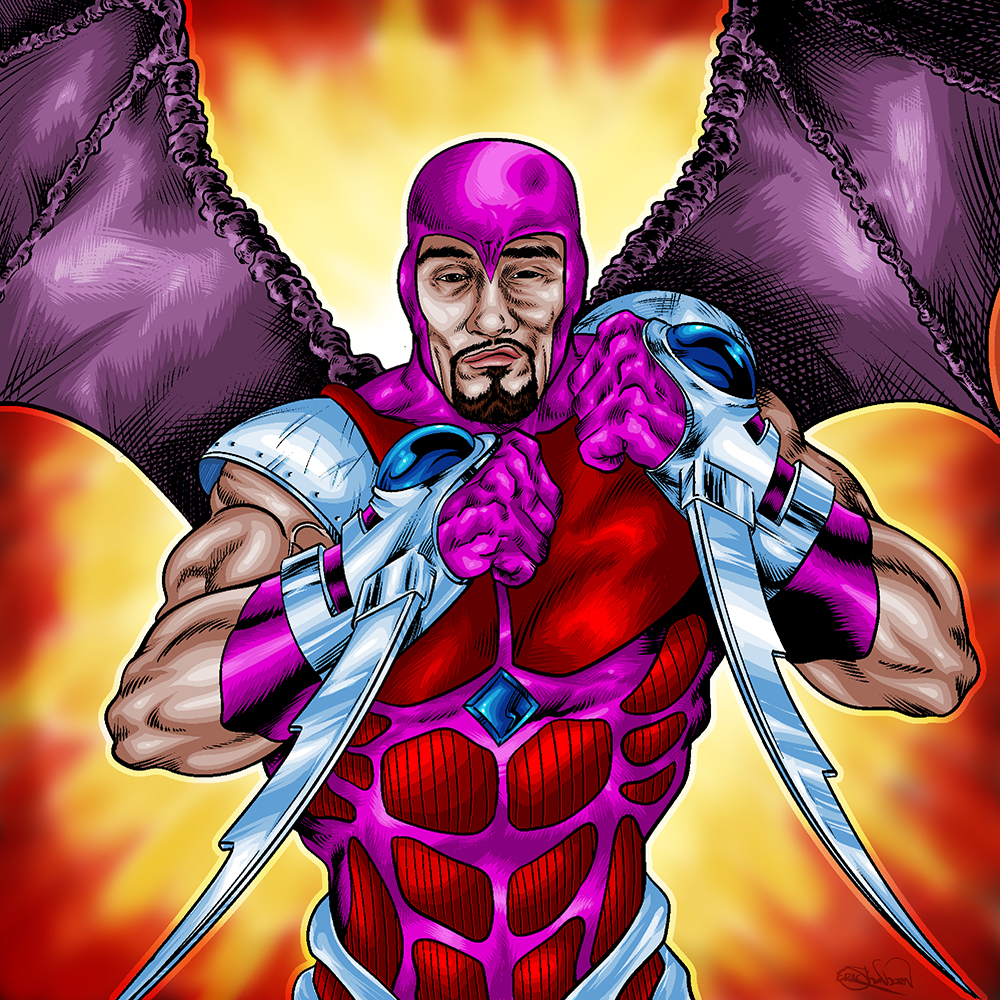 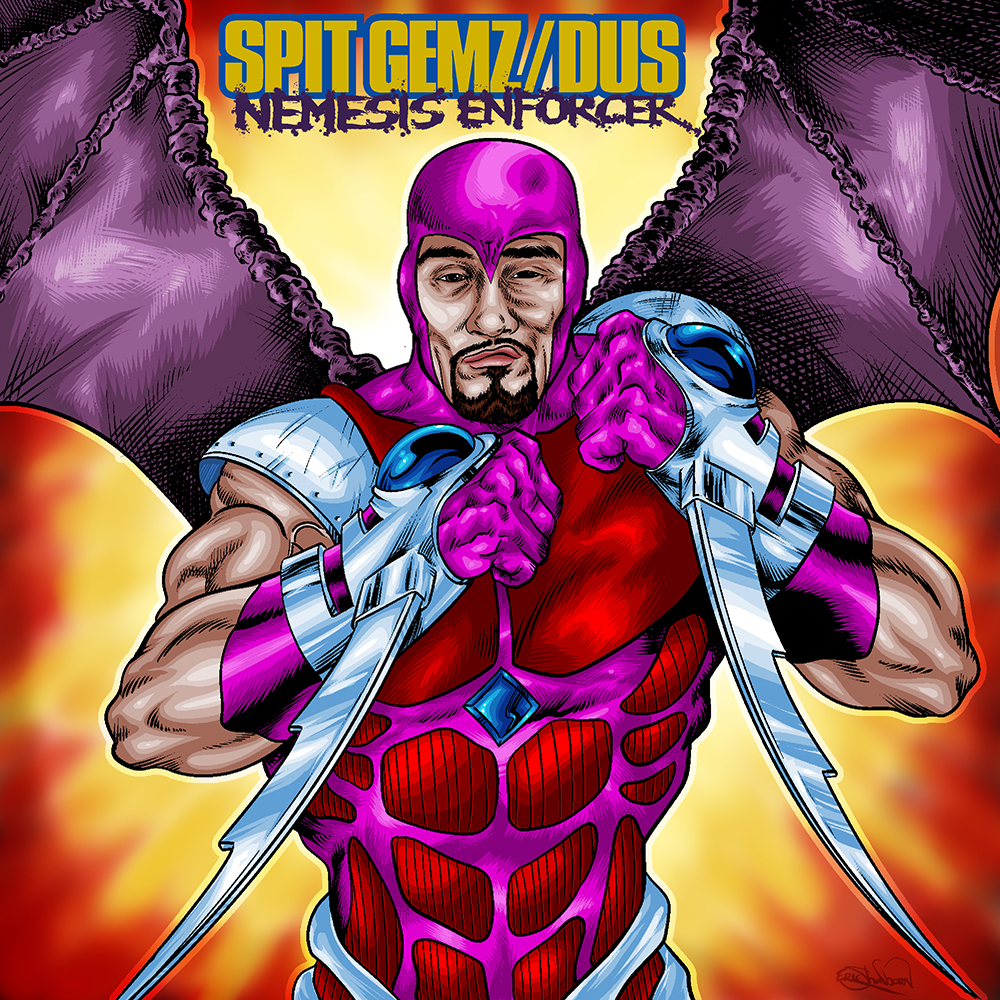